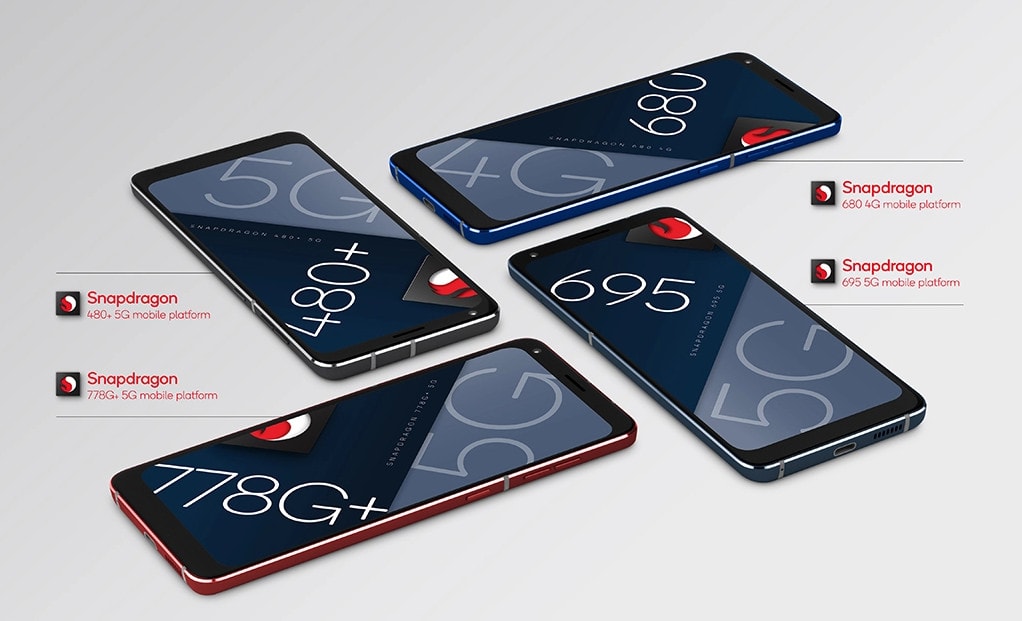 Qualcomm has announced four new mobile platforms – Snapdragon 778G Plus 5G, 695 5G, 480 Plus 5G, and 680 4G across high-, mid-, and entry-tiers. The company says that these mobile platforms will offer increased performance and capabilities to provide OEMs with additional options to help meet the existing demand.

The New Snapdragon 778G+ 6mm is an upgraded version of the original Snapdragon 778G with boosted CPU and GPU performance. The old and original Snapdragon 778G chip proved to be quite popular among the premium and mid-rangers flagship smartphones and we suspect this new 778G+ chip will be even more so. The Snapdragon 778G+ has a Qualcomm Kryo 670 CPU, which offer higher performance up to 2.5 GHz compared to 2.4 GHz in the original 778G. In the GPU department, there is an Adreno 642L, which will deliver up to 20% faster graphics rendering compared to the previous version. According to the company, the other specifications remain the same.

The Snapdragon 695 8nm SoC is the successor to last year’s Snapdragon 690 Mobile Platform that uses Qualcomm Kryo 660 CPU with up to 2.2 GHz clock speeds compared to 2 GHz Kryo 560 cores in the predecessor that promises up to 15% improvement from the previous generation.

Another major part of the upgrades is the node – the Snapdragon 695 is a 6 nm chip, replacing the older 8 nm node, which definitely has more energy efficient.

It also has Adreno 619 GPU that promises up to a 30% higher performance increase compared to the previous one. Unlike the old Snapdragon 690 which only has sub-6 5G support, the Snapdragon 695 also brings mmWave 5G support.

The new Snapdragon 480 Plus 8nm SoC, is a slightly improved version of the original Snapdragon 480 with boosted CPU and GPU performance. This new chipset has Qualcomm Kryo 480 CPU that brings a higher clock speed up to 2.2 GHz compared to 2 GHz in the Snapdragon 480. In the GPU department, there is Adreno 619, which is the fastest in the 400-series chipsets.