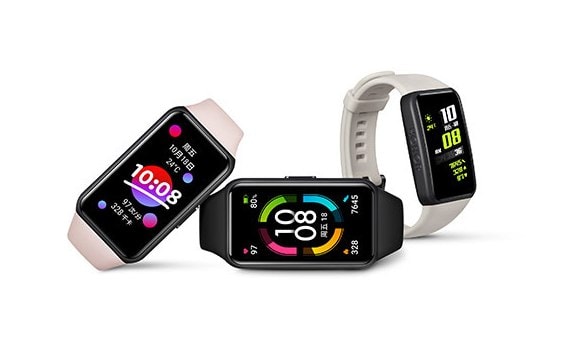 HONOR sub-brand HUAWEI has officially launched HONOR Band 6 as the world’s first full-screen fitness tracker. HONOR Band 6 comes with two variants:- with the NFC and without NFC. The design of this portable device is different from its predecessors. It can be considered as a mini version of the recently launched  HONOR Watch ES.

HONOR Band 6 has a 1.47-inch AMOLED display with pixels of 194 x 368 and 2.5D glass resolution. It does not come with capacitive keys as it uses gesture navigation on smartphones. But it has a red-accented physical button on the right side to wake up the screen. Whereas, on the left, it has HONOR branding.

The fitness tracker comes in three color options that are Meteorite Black, Seagull Gray, and Coral Powder. However, it is worth noting that the colors apply only to the strap as the body remains black in all three variants.

Apart from this all, the internal of this wearable includes Bluetooth 5.0, accelerometer, gyroscope, optical heart rate sensor, and 180mAh battery. The fitness tracker is water-resistant up to 5ATM and will charge with the help of the magnetic charger. The dimension of the tracker is 43 × 25.4 × 11.45mm and the weight is 18g without the strap.

Although HONOR did not say anything about its international availability, the product should be brought from the brand to global markets like other wearables.